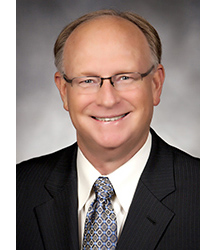 TULSA, Okla. – The WPX Energy (NYSE:WPX) Board of Directors has named Richard E. (Rick) Muncrief as the company’s next president and chief executive officer. The appointment is effective May 15, 2014. He also will join the WPX board following the company’s annual meeting of shareholders on May 22.

Muncrief, 55, is a petroleum engineer who has more than 30 years of upstream and midstream energy experience, most recently as senior vice president of operations and resource development at Continental Resources (NYSE:CLR) where he oversaw corporate engineering, reservoir development, drilling, production operations and supply chain management.

“Rick has an accomplished record of sizing things up and driving plans that produce exceptional results, profitable growth and lower costs,” said WPX Chairman William G. Lowrie. “He has prior experience in our growth areas, particularly the Williston and San Juan basins, and is ready to hit the ground running.

“Our board believes that Rick is going to connect very well with investors and employees alike as he charts a strategic course for WPX. His technical acumen, driven nature, operations experience and character are a great fit for shaping the future of the company,” Lowrie added.

Muncrief has worked in organizations of differing size ranging from independents to a large super-major, notably 27 years with ConocoPhillips, Burlington Resources and their predecessor companies in various technical and leadership capacities.

He received a Bachelor of Science degree in petroleum engineering technology from Oklahoma State University in 1980. Muncrief is a native of southern Oklahoma and has spent the majority of his career in the Rocky Mountain region.

“There’s an innovative spirit at WPX,” Muncrief says. “I expect WPX to succeed, and I’m eager to become part of the company. We have much to leverage from WPX’s assets and the contributions of those who helped forge the company into a leading independent producer.

James J. Bender, who has been serving as WPX president, CEO and board member on an interim basis since December 2013, plans to retire upon completing the transition of his duties to Muncrief. Bender previously was the general counsel and a senior vice president at WPX following its spinoff from Williams in early 2012.

WPX Chairman William G. Lowrie added, “Our board is grateful to Jim for his leadership and service. He effectively managed challenges, executed on the business’s priorities, provided stability and made critical decisions to help set the stage for a transformational time at WPX.”

WPX retained the recruiting firm of Spencer Stuart to assist the company in its search process for a new chief executive officer.

WPX Energy is an independent exploration and production company formed during a spinoff two years ago. Overall, WPX has more than 30 years of experience in its sector along with 40 local, state and federal awards for efficiency, innovation and corporate social responsibility.

This press release includes “forward-looking statements” within the meaning of the Private Securities Litigation Reform Act of 1995. All statements, other than statements of historical facts, included in this press release that address activities, events or developments that the company expects, believes or anticipates will or may occur in the future are forward-looking statements. Such statements are subject to a number of assumptions, risks and uncertainties, many of which are beyond the control of the company. Statements regarding future drilling and production are subject to all of the risks and uncertainties normally incident to the exploration for and development and production of oil and gas. These risks include, but are not limited to, the volatility of oil, natural gas and NGL prices; uncertainties inherent in estimating oil, natural gas and NGL reserves; drilling risks; environmental risks; and political or regulatory changes. Investors are cautioned that any such statements are not guarantees of future performance and that actual results or developments may differ materially from those projected in the forward-looking statements. The forward-looking statements in this press release are made as of the date of this press release, even if subsequently made available by WPX Energy on its website or otherwise. WPX Energy does not undertake and expressly disclaims any obligation to update the forward-looking statements as a result of new information, future events or otherwise. Investors are urged to consider carefully the disclosure in our filings with the Securities and Exchange Commission, available from us at WPX Energy, Attn: Investor Relations, P.O. Box 21810, Tulsa, Okla., 74102, or from the SEC’s website at www.sec.gov.

You Should Be At WPX
Visit Video Channel

Nearly 90% of product revenues from oil


Embed code has been copied to clipboard.